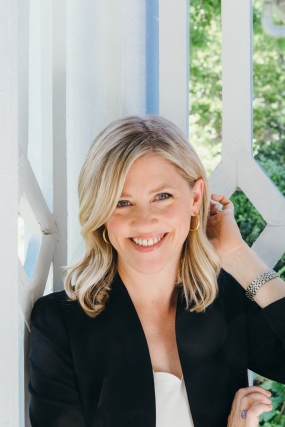 Mary Laura Philpott is the author of the new memoir Bomb Shelter: Love, Time, and Other Explosives (April 2022), which was called a “masterwork” by the New York Times and a “beautifully wrought ode to life” by the Washington Post. It was also named an Editor’s Choice by the New York Times Book Review, an Indie Next pick by booksellers nationwide, an Amazon Editor’s Choice selection, and a best book of the spring or most anticipated book of the year by publications ranging from the Washington Post to the Read with Jenna community on TODAY.com, among others. She is also the author of the national bestseller I Miss You When I Blink — which was named one of NPR’s Favorite Books of 2019 and a finalist for the Southern Book Prize. Her essays examining the overlap of the absurd and the profound in everyday life have been featured by The New York Times, The Washington Post, The Atlantic, and many other publications. Additionally, Mary Laura (yes, she goes by both names) is a former bookseller and was an Emmy-winning co-host of A Word on Words, the literary interview program on Nashville Public Television. She lives in Nashville, Tennessee, with her family.

Shorter version, when needed for brief introductions, etc:
Mary Laura Philpott, nationally bestselling author of I Miss You When I Blink and Bomb Shelter: Love, Time, and Other Explosives, writes about the overlap of the absurd and the profound in everyday life. Her writing has been featured by The New York Times, The Washington Post, and The Atlantic, among many other publications. A former bookseller, she also hosted an interview program on Nashville Public Television for several years. Mary Laura lives in Nashville, Tennessee, with her family.